Normally I don't like to do a lot of irrelevant posts because they are, well, exactly that, irrelevant. Not that I mind them on other blogs, because they are usually funny and such, but I felt that I needed to address this to my non existent audience.

I watch Burn Notice, which to my content has Bruce Campbell in it. Normally I don't look at him and think Ash! He's a good actor and it's easy to separate him from his horror nobility to his ex navy seals persona on the show. However; last night's episode he put on these cerebral looking glasses and I got a wave of Evil Dead. 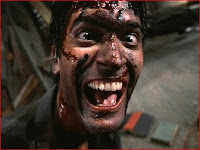 I don't know why, as Sam's uneasy tow truck cover doesn't really have anything in common with Ash's unhinged zombie killing personality (especially in that picture), but it happened. I couldn't really shake it for the rest of the episode, maybe it's just time for me to re-watch the series again, or maybe it's because I found out this week that Evil Dead 4 is a maybe.
Posted by Bleeding Dead at 1:05 PM
Email ThisBlogThis!Share to TwitterShare to FacebookShare to Pinterest
Labels: Cult Horror, Irrelevant