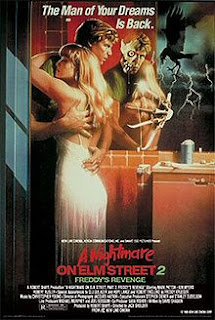 A Nightmare on Elm Street Part 2: Freddy's Revenge, returns to the the famous Elm Street house in the first one. Five years later a new teeanger, Jesse Walsh, has moved in with his family. Jesse, as so many, is struggling a bit with growing up, and has more issues now that Freddy Krueger is haunting him. Freddy is still angry about being one uped by Nancy, so in his attempts to solve his anger he decides to seek revenge, through Jesse. But have no fear, Jesse and his girlfriend Lisa find Nancy's diary, guiding them through the nightmares. I must say part 2 has flaws, to put it kindly. Between plot, character, and directing issues.

Manipulating the dream/reality complex proves to be to disorienting in this one as Jesse is in neither one nor the other. Freddy no longer is able to solely control the dreams of teenagers but as well as the physical elements around them. That first off breaks the dream barrier that was well constructed in the first film. And secondly, as I said before, it's hard to distinguish what's going on. A lot of Freddy's actions this time are not so much Freddy. He doesn't really toy with Jesse but rather uses him, He preforms a lot of Poltergeist tricks, i.e. setting the toaster oven on fire, making the birds go crazy (in truth the Walsh family has a good case for paranormal investigators). The ending is dull, the boiler scene leaves little to nothing to remember. 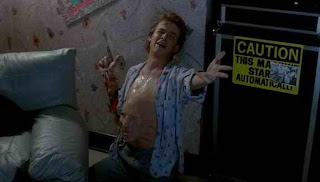 A rumor with this one is that the films contains gay subtext. I've heard those who see it and those who don't, in my opinion...yeah it's a little bit leaning that way. Jesse seems to be teetering on his sexuality bounds throughout the film. There's subtle clues (board game Probe in the closet anyone?) and there's the not so subtle clues, like Coach Schneider's death. But its not bad in anyway, in fact it gives more depth to a script that lacks any real meaning or connection. The Never Sleep Again documentary had interviews with the director and he mentioned not liking the first film, however, a lot of people DID like the first film. It seems more that he set out to make a quick fix horror film than anything that stems off Craven's first piece. 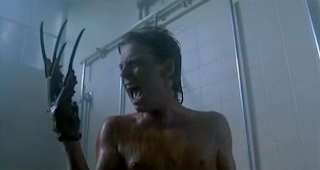 The second took a steep fall from the level the first one was on. It, in short, missed the point. A Nightmare on Elm Street is known for being an imaginative series, though I don't think that title got earned until the third film, this is still however lacking. I did like though that they managed to clear some confusion to the ending of the first film in this. It's not great, if anything watch it for Jesse's infamous man scream.
Posted by Bleeding Dead at 9:19 PM
Email ThisBlogThis!Share to TwitterShare to FacebookShare to Pinterest
Labels: Cult Horror, Franchises, Freddy Krueger, Gay Subtext, Horror Icons, Never Sleep Again, Robert England, Slasher Film