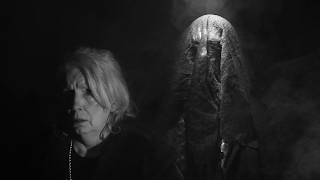 
Lost in a sullen neighborhood a wealthy woman is lured out of her car by falling hundred dollar bills, despite the shadows she's seen skulking in the fog. Out of the Night is similar in Shea's previous short film, Microcinema, in that it uses its events as an analogy for a more deeper understandings of the human condition. As voyeurism and obsession was the topic of the former the latter helms topics of greed, desire, and how in light we view strangers. The woman in the film is lost, scared, and likely at the other end of the tracks, however her lust of money leads her out into the night to gain more wealth even with the figures hidden in the fog. Of course for those who don't look so deeply the surface level horror is done well with the fear of being lost at play as well as the sense of dislocation. We never find out where the wealthy woman has wander off too, whether it be an odd neighborhood or some city of the afterlife.

Shea has a way of taking our expectations as an audience as well as the expectations of the character to offer us a different alternative. His films have a knack for unveiling the illusions of reality and exposing the often brutal truth. Not all is so bleak as Shea's dark humor is subtly placed in the film, mostly near the end. Gwendolyn Callahan is great, her role consists of no dialogue but her often lurid expressions fill in that utter terror of being lost in a neighborhood that vastly differs from her own. The score was taunt, lucidly attendant to the chilling atmosphere that's been set. The photography is simply gorgeous, utilizing classic black and white. There's a really exceptional image of Callahan vanishing into the fog; it fluently lacing around her, dissolving her figure into the darkness. I really liked Out of the Night, however it was a film I had to watch a few times to fully grasps the concept. In that I do recommend with a little hesitation as this film will likely go over a few people's head. But if your like me and you love reading into horror with deeper meanings than I'd say don't miss it.

Out of the Night will premiere at the SENE Film, Arts & Music Festival on Sunday April 28th at the Cable Car Theater in Providence, Rhode Island. For more information you can visit - http://www.senefest.com/dramatic-short-films.html
Posted by Bleeding Dead at 9:23 PM
Email ThisBlogThis!Share to TwitterShare to FacebookShare to Pinterest
Labels: Drama, Horror Shorts, Thrillers

Very nice review! I hope to see this short soon in my area!

Definitely. If you get a chance don't pass it up.