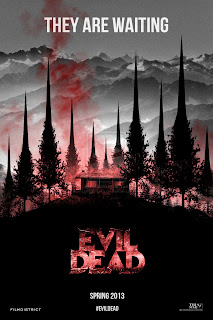 The Book of the Dead rises again when a brother and sister visit their family cabin, their friends and them becoming subjects to possession. Mia, a dissipating drug addict, invites her brother, his girlfriend and their two childhood friends to stay a weekend up at their old family cabin to help her come clean of drugs. Agitation heads early on when Mia's temperament is a rising slope, escalating with every irritation from withdrawal. Its Mia's heavy complaint of a fowl smell coming from the basement though when the friends uncover a collection of dead animals and none other than the Book of the Dead. Eventual curiosity on one of their parts leads to the book being read from and soon enough Mia becomes possessed, her weakened state and soul an attractant to the entity. Violent, vulgar, and lethal her new attitude lands her a spot in the cellar where she tempts and tries to over take each friend. According to the book it needs five souls to collect in order to let the skies rain red with blood and raise the Abomination. And as the book begins taking the friends one by one it's up to Mia's brother David to purify his sister's soul and stop the Abomination from ascending.

Evil Dead isn't a remake nor is it quite a sequel, as such should it be treated. On its own the film is a little dull with a refreshing change in location motive (no underage parties here, this weekend vacation is strictly for emotional purposes) but with run of the mill characters, maybe the exception of Mia. As a sequel most Evil Dead fans will likely hate it, however as I'm not really a die hard Evil Dead fan I'm not here to hold it accountable for it's off centered placement in the franchise. Oddly though as a remake I believe it works the best. The film 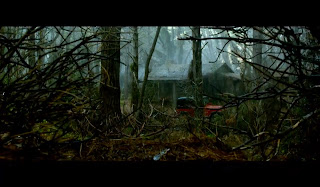 has mastered that ability to play homage to the prior films without direct ripping off, as is my general irk with remakes. Instead of copy and pasting iconic scenes from the first film they take the essence of the scene and alter it to be original but yet still apparent as to what they are referencing too. Original writing credits attribute to Diablo Cody and despite that she didn't get credited in the film I believe her original script served as sturdy backbone to the film; without it wouldn't be able to stand on its own. There's humor in the film, but its no horror comedy, and despite it being an fair homage to the first don't think Raimi's roguery or homemade scares are in here, its a far different film.

Initially I was excited to see Shiloh Fernandez as a lead character as I loved him in Deadgirl, but he actually disappointed me a little. There was no bad acting but overall uninspired, as was Fernandez's David. He didn't embrace that last man standing like in the first film, but rather took the very typical approach of being a skeptic and then went about stumbling through the rest. Jane Levy is at the top of the pack with her performance of Mia but its also a given with her character being the only one with an arch. Again, as I said none of these young actors are bad, by any means, but their characters lacked depth and they didn't bring any further dimension on their own. Therefore leaving Mia with the most back story and more meat to her character. Levy was steady as the withdrawing drug addict but delightfully wicked as demon Mia, another testament to Raimi's original piece. Before the films release the filmmakers made an adamant statement that there will be no CGI in the film, and it pays off as it looks absolutely stunning. Between the special effects, relying on old school makeup, and the dense mood lighting the production of the film alone is worth seeing. 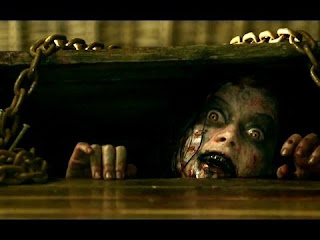 It's a fair statement to say that if it hadn't been for the second go at the ending I would not have cared for the film as much. The initial hour is entertaining, the blood and antics being the only glue to hold you to the film, but it's pallid and offers little else. It's SPOILER Mia's Resurrection or exorcism, what have you, and her final face off towards the Abomination that actually puts this into Evil Dead category. The final sequence is immensely gory, offers the only real suspense moment in the film, and has the style of Bruce Campbell. From that I really liked the ending and wished the rest of the film had been in more of that style than the approach they decided to take. However, I don't want to hate on the filmmakers, as I do believe they tired to make an original concept and a high production horror film. There's no illusions that this was partially made to make profit off a very successful horror series, but in that they didn't just throw away craft to produce a film. They actually tried and that's what counts. Don't take it for anything other than what it is as Evil Dead isn't a masterpiece but it's fabulously entertaining and I'd say see it. In theaters or at home.
Posted by Bleeding Dead at 10:42 AM
Email ThisBlogThis!Share to TwitterShare to FacebookShare to Pinterest
Labels: Bloody, Possession, Remake

I liked the new vision; I just wish it was scarier than it was. Great review.

I agree. That seems to be the general reaction. Good film but little scares.