Horror Short: The Devils Walks Among You (2011) 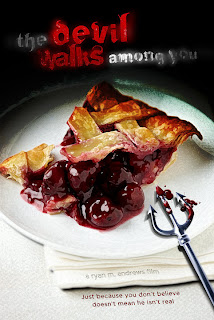 Alluring and mysterious Lilith Mastema tells of tales in her live spoken word show, showcasing a classic old jazz style to her stage. Tonight's tale is of a late night diner that receives an elliptic customer after closing, whom later reveals himself to be the Devil. The Devil Walks Among You is a short, 8 min run time, thriller that doesn't dwell on literal horror. Unlike you expect the Devil doesn't enter the dinner and upon doing so raises 'hell' but rather in an subtle yet haunting etiquette chills you to the bone with his simple message of walking among us. Often fit with short films is the grab or rather the shock and awe moment, but Andrews script and direction risks for a tame story that flows fealty into its disquieting end. Basically, don't expect an abundance of blood but anticipate a quiet thriller that's more about the essence of horror rather than the incarnation of it.

Robert Nolan again comes in as the sly but ever so charming Devil, another expo in the actors unbound talent. Sandra DaCosta is stunning, a fitting portrait for her cool lounge character as her voice narrates the story with a chilled ease. Ryan M. Andrews direction is crisp and there's little pitfalls in his overall well made short. I may like the style of the film the most though, with the interweave of the 1950's diner and early 1930's lounge den. As a lot of the shots, especially those showing DaCosta, are up close it limits the view of the sets making the photography key in conveying the tone. The detailed design of the diner is accurate in its depiction and the mood lighting in both sets captures the feel. The diner under gray florescent sets you off balance and the lounge is dimmed to tense and focus the mood. Although I rarely do I'd also like to note the costume department who I think dressed their cast appropriately, letting way to more of the characters personalities. The Devil Walks Among You was an enjoyable, well made horror short, that I'd recommend to most for its appreciated style and familiar concept.
Posted by Bleeding Dead at 10:22 AM
Email ThisBlogThis!Share to TwitterShare to FacebookShare to Pinterest
Labels: Drama, Horror Shorts, Thrillers