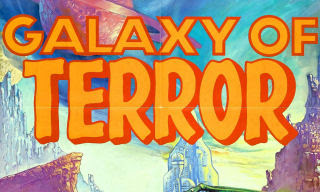 "These characters are hoot with their actor counterparts also suitably enjoyable. You'll recognize Robert Englund (!) in a pre-Nightmare and V role, Sid Haig who regally gets killed by his own arm, and veteran actor Ray Walston. I didn't care for Erin Moran or rather 'Joanie loves Chachi' as the psi-sensitive character who in turn renders useless, her ability not being remotely helpful and her character reflecting the same abhorrent tendencies from that of her TV alter ego. But it's Taaffe O'Connel as Dameia who gets the infamous, brutal, and erotic sex scene with the worm, where she dies via orgasm"

Yes I actually used the word hoot. Sue me. As usual you may read the rest here.
Posted by Bleeding Dead at 12:59 PM
Email ThisBlogThis!Share to TwitterShare to FacebookShare to Pinterest
Labels: Roger Corman, TDHorror Retro Review