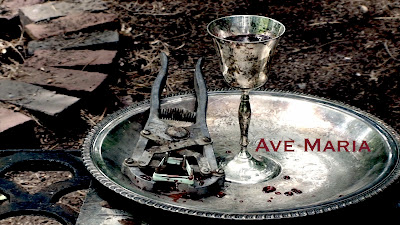 MASSACHUSETTS (June 24, 2013) –The new Skip Shea short horror film “Ave Maria,” the sequel to his 2011 award-winning cult horror hit short film “Microcinema,” will have its world premiere screening at Nick’s, 124 Milbury St., in Worcester on Tuesday, July 2, at 8 p.m. Spinning off from the story of the last famous castrato Alessandro Moreschi, who recorded the song of the same name in 1902, Shea takes horror fans into the haunted woods of New England to witness the twisted reenactment of an old Catholic tradition.

Written and directed by Shea and produced by Harvest Tide, “Ave Maria” stars Aurora Grabill and David Graziano, with Izzy Lee, Diana Porter and Jami Tennille and director of photography Nolan Yee. Shot on location in the Blackstone Valley, “Ave Maria” will also be featured in an upcoming documentary “Something Wicked This Way Comes” by Wicked Bird Media, a first-ever exploration into the connection between New England and contemporary horror culture.

The “Ave Maria” premiere will include a screening of “Microcinema,” which won Best Short Award at the Jersey Gore Film Festival, a Rondo Hatton honorable mention and scored on several best-of lists as a cult favorite with horror reviewers and fans alike. “Microcinema” is a revenge film that breaks tired formulas and Shea’s follow-up film “Ave Maria” takes revenge to another level.

Shea, a survivor of clergy sexual abuse that occurred in the Diocese of Worcester, has produced, written and directed numerous short films including “Mail;” “Video Diary: Last Entry;” “They Serve Breakfast Here All Day Long;” “Putting On Its Shoes;” “Choices;” “Out of the Night;” and “Children of the Asylum.” Among his awards are Best New England Film at the 2012 Massachusetts Independent Film Festival for “Choices;” Audience Award for Best Regional Short at the SENE Film Festival for “Children of the Asylum;” Shriekfest in Los Angeles named the feature length script for “Microcinema” a semi-finalist for Best Screenplay; and the 19th Annual Woods Hole Film Festival gave Shea’s screenplay “The Bar” runner-up for Best Comedy Short.
Shea also produced, wrote and performed the successful one-man theatrical show “Catholic (Surviving Abuse & Other Dead End Roads)” which debuted in New York City in 2005. The show went on to have a successful run at the Jimmy Tingle's Off Broadway Theater and toured the East Coast. Shea is also a published poet whose piece “Songs of Mourning,” a memorial to those killed in the September 11attacks in New York as well as to his daughter Shawna Shea, was selected by New York City jazz musician Jon Faddis to be performed at the 9/11 10th Anniversary Commemorative Concert performed at Symphony Space by the New York Chamber Music Festival.

Horror reviewers and bloggers are giving “Ave Maria” early kudos, among them are:
The Gruesome Hertzogg Radio Podcast gives it a 9 out of 10 rating!
The Killer Aphrodite calls it “an excellent short film”
Dr. Carnage calls Missy “one of the creepiest female characters I have ever witnessed in a horror movie.”
Super Duper Shock Cinema says that the “smart ending that betrays your perception of what’s happening.”
[Re] Search My Trash calls it “A haunting little movie that sets an act of extreme violence against a very beautiful scenery…”
Gemini Moon Media says “Ave Maria is a brutal look at revenge.”
The premiere screening of "Ave Maria" is free of charge. This film is adult in content.