I don't believe! Sorry my grandma is watching the Skeleton Key and I'm reliving the revelation of how horrid it is. I did it. I wrote another Retro Review, try not to be too impressed as I managed to get it in five days before the end of the month. But I did post my Midnight Son review earlier in the month so that can count as half of the the second film I'm suppose to be writing about every month but never do. But if I can say anything I felt that I did I put a lot more effort into this review than my last few reviews that are really just bad. Not quite like my old Retro Reviews but maybe, MAYBE, as in don't jinx me, I might be getting settled? 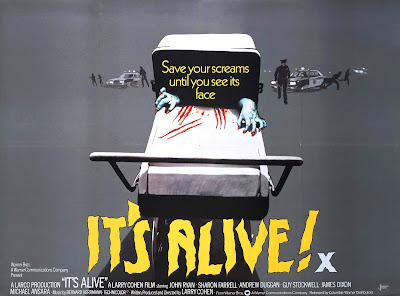 "The first twenty minutes of the film are a kept pace to a bloody shock that I love in Larry Cohen's script. The rest is a watered down suspense film that pays more as a B-film than anything. As the baby squirms about the city, killing those who frighten him, we're paralleled and generally bored with watching the father and the police in search of it. This is not all bad though as this is where the performances are at their strongest. It shows the emotional trauma that blooms out of such a horrid happening."

As it goes you may read the rest here. Also I did not do a post for Midnight Son as the review is available on this blog but if you wanna read it over at TD you may do so here.

Now for updates. August didn't reboot as much as I wanted but you did get two reviews in the month, a TD review, and two more surprise posts next week so it wasn't all bad. September will likely not be as full as normal either as I sat down yesterday to compose my Top Five List and Reviews for October and realized the magnitude of films I need to watch in the next month. I promised myself I would not do this but it really would be out of character if I got it done early. Also I'm hoping to do four Retro Reviews for Truly Disturbing for the month of October but I don't know how I'll do that. By the time November comes I'll probably be worn out of writing. But we'll see.
Posted by Bleeding Dead at 11:35 AM
Email ThisBlogThis!Share to TwitterShare to FacebookShare to Pinterest
Labels: TDHorror Retro Review