WARNING: Contains too many spoilers 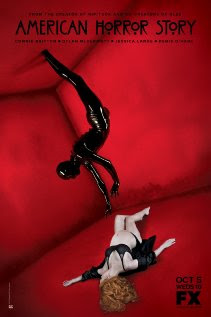 Viven and Ben Harmon are looking for a new start, well Ben more than anything. After being caught having an affair with one of his college students Ben believes that moving to a new home across the country and reopening his practice is what will save his broken family. Viven however is not as willing to move on as the pain she feels from her husband's indiscretion doesn't match that of the pain she feels from her miscarriage. Willing to fix her family though Viven moves with her husband and their only child Violet to California in an old house that has a very colorful history. The most recent being the previous owners, a gay couple, who died in the house by a murder suicide. Not only that but several other murders have occurred in the house dubbing it 'The Murder House'. But the limitations don't hold to the house either as their neighbor, Constance Langdon, is a strange and somewhat unnerving individual. And Ben's new teenage patient, Tate, whose mental stability is that of teeter totter has taken a liking to Violet. As the Harmon's attempt to settle into their new lives their past horrors will come back to haunt them, as will the ghosts of the house's past.

I have a very destructive and defining love hate relationship with American Horror Story. At moments the brilliance of the show is so sheer in sight that it's almost difficult to handle. Then there are times, equally as frequent, where the show convinces me that it's alright to stick in my head in the oven. Most of the time AHS lost focus with it's main story arc of the real horrors of the Harmon family in contrast with the house. I'm also let down that the house has a good eighty so years of history to its name and they only took focus to Tate's story. I loved the school shootings, it was so tragic and the true definiton of horror that it again rung brilliance in script writing, not to mention being pulled off so well by actor Evan Peters. But then the revalation that Tate was also the Rubber Sex Suit Guy (will not get tied of that) who raped Vivian took a really hard turn into bad writing. I'm pretty confident, from what actors have said and other clues, that the script for each episode was written on a weekly basis, not giving the writers time to reflect and even less time to edit. Not to mention the occasional plot hole that tends to slip in when your rushed in writing that way. Next season I do hope for more refinement. 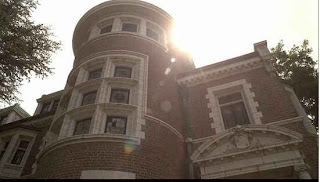 American Horror Story served a lot of pre-season buzz from its grabbing previews and its campaign for owning a clue (I got one, via email that is, a jar of some body part that never made itself present in the show). If you went to Yourgoingtodieinthere and explore around the house as I did you'll remember the dead bride, bloody champagne bottle, Heather from Dead Central's Demon Bunny, and a thousand of other bits that never made them self on the show. Of course they still have room on season two but its not the same house so why do that? Why not update the website with the new location? A lot of pre speculatioin suggested this to be a Psycho-sexual-thriller with that post of Mrs. Harmon and the Rubber Suit Sex God, pulling towards each other. It wasn't. Another disappointment. I think AHS suffered from too much marketing, as did True Blood season 3, in that it built up expectations that either were never reached or never intended to be reached. Of all the things I loved in American Horror Story, the horror references are the most fun for a horror addict like myself. Within an episode you could see the influence of a film or films that was to inspire the episode, that varied between old school horror like Rosemary's Baby to new iconic images like the masks in The Strangers.

Of the Harmons the only one I liked was Viven played by Connie Britton. She has the ability to just say how it is, and not in that blunt Violet way. She also had an asshole husband, a moody daughter, and is living in The Murder House. Plus I'm fucking jealous of her hair, it curls so nicely. Dylan McDermot was alright as Ben Harmon, I believe more of the problem lay less in the acting and more in the character itself. Ben was an asshole, and there's no way around that. Crysterbating to the maid doesn't help your case much either. Violet was on my 'Characters I hate list' at the beginning of the show. I wasn't all sympathetic to her moody demands, pregnancy statistics, and her relationship with Tate. It was, again, never so much Taissa Farminga's acting, as she was good, it was the character. But the episode 'Piggy Piggy' not only showed the full potential of the actress (she was excellent in that episode) but the full potential of the character. As the season went on she improved and I liked her much more towards its end. 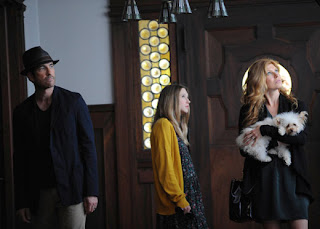 Not to gush too much but Jessica Lange is the reason I watch this show. Like I do like this show but the reason I watch is for her captivating take as Constance Langdon. The character itself is complex and layered beyond anything a twelve episode show could cover, but Lange is able to let way to all the hidden past and repressed emotions of her character. It's as if she's stuck in the house's decaying age with her old school comeliness. The acting is nothing I've seen before. Absolutely fabulous and I recommend watching an episode for this reason alone. My second love of this show is Evan Peters as Tate Langdon. Tate was not my favorite, to put it lightly, at the start of the show. His 'I'm crazy rampages' paired with Violet's weird girl suicides made for a unlikable teen angst couple, that I did not care for. I use to call him Taint, just to be spiteful. The Halloween episodes though Tate made amends for his bad behavior and started getting interesting. Then of course I fell in love with the dysfunctional relationship him and Violet spawned in 'Piggy Piggy'. I also grew to love Evan Peters acting, not necessarily the touching side to Tate (though that's well played too), but the darker bits. When he pretended to shoot himself with his finger gun it was really chilling. Like a lot of actors it seems it just took a few episodes for him to settle into the character, and the character to settle into the show. 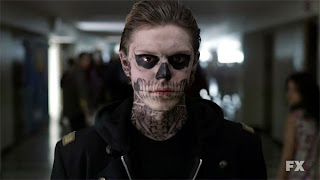 Again, even Murphy and Faulker's angle for next season, a new haunting, new characters, but same actors creates a battled cloud of emotions. I'm disheartened by the loss of Tate and Constance characters, as well as the maybe inconclusive anti-christ story but at the same time I'm intrigued because it hasn't been done before, which is to be quite honest brilliant. Then again this all may be premature, I don't know how season two will play out or if that's even the direction they will go in. Maybe it'll all tie up in the end and I can just back away and be in awe. But aside that the Harmons still had a rocky storyline. At the end I'm conflicted, I don't know how to feel about American Horror Story. It has bad plot structure but its beyond addicting. At the basis you'll either love it or hate it.
Posted by Bleeding Dead at 4:05 PM
Email ThisBlogThis!Share to TwitterShare to FacebookShare to Pinterest
Labels: Disturbing, Drama, Ghosts, Haunted House, TV Show

I was unsure about watching “American Horror Story,” when it premiered. After much convincing from my co-worker at Dish, I was able to watch an episode. I must admit, it had the perfect eliminate of scare, and drama. Now that the series is on DVD, I have added it to my Blockbuster @home DVD queue. The shipping is fast, and I can return the disc back to the store and exchange for another disc in my queue. I think Jessica Lange is amazing, and I have not seen her act this well in years.