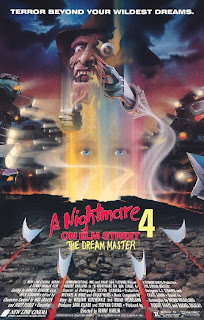 I am the wizard master! Oh wait wrong Nightmare. A Nightmare on Elm Street 4: The Dream Master starts with our previous heroine Kristen having nightmares again, although Freddy is DEAD and Kincaid and Joey try to convince her otherwise she is bothered by the thought that he might be back. By a hellish chain of events Freddy is resurrected and kills Kristen, but not before Kristen pulls Alice, a friend of her's from school, into the dream and gives her power over to her. From there it becomes the contrived plot line of Alice and her friends trying to stay awake and live through Freddy's nightmares. Nightmare on Elm Street 4 proves to not be as good as its predecessor but not awful all around.

The film is quite visually pretty, my favorite being the water bed scene that illuminates green's in blues in a darkly lit room. The death's in this one don't register as anything special in my eyes, and maybe it's just a pet peeve of mine but what's the point of Freddy's claws if he isn't going to kill anybody with them? In truth the best, more creative I should rather say, is Freddy's death, which I loved! In the reviews for the Nightmare remake I noticed that a lot of individuals were criticizing the fact that Freddy didn't toy with his victims before killing them, which I have to agree would annoy me too since it's one of my favorite things about Freddy. But this film seemed to fall victim to the same fault, he toyed with two teens, Alice and Kristen but offed the others without second thought. Am I being picky? Maybe. 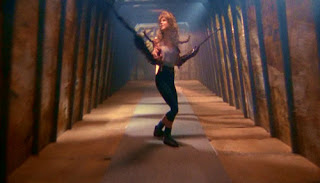 Its saddening that Patricia Arquette did not come back for this one, her replacement is deficient, to say the least. Her scream sounds more like her having an orgasm rather than her burning in a pit of fire, every line out her mouth is forced, and she just didn't really get the Kristen character. I liked Alice's transformation, a nice layer to the movie that worked out subtly enough. As for the others well Alice has a lot of friends, who die of course, all of which are played by eager young adults wanting to be in a movie, but their names aren't memorable enough nor is their performances. Is it appropriate for me to gush over the same actor in 7 reviews straight? Probably not so I'll just say that it's Robert England playing Freddy Krueger. 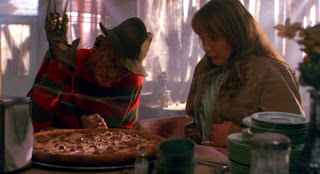 I didn't hate the film, that's a bit drastic to say, but in a lot of ways it wasn't for me. I've observed that in the past three Nightmare's that Freddy's makeup is pretty weak, not really looking like burns. Maybe I'm just nit picking because the first one of is one of my favorites but who knows. This is also the film where the one liners become a small annoyance, nothing too excessive but you notice. As I was saying I don't hate the film, but the lack of blood and the shift in separating some of the mythology from the first film is enough to surpass good direction and a visually satisfying film.
Posted by Bleeding Dead at 8:44 PM
Email ThisBlogThis!Share to TwitterShare to FacebookShare to Pinterest
Labels: Cult Horror, Franchises, Freddy Krueger, Horror Icons, Never Sleep Again, Robert England, Slasher Film, Visually Satisfying