WARNING: May contain some spoilers 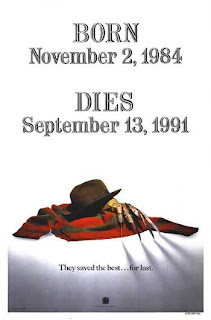 After The Dream Child didn't live up to its two predecessors they went ahead and decided that introducing new characters would be the best route for the series. In Freddy's Dead: The Final Nightmare Freddy is aspiring to get out of Elm Street as a decade and a half (this film is set in 1999) of killing in Springfield has become tiresome, that and he's killed just about everyone under the age of eighteen. Chasing after the last teen proves to be a fail as John Doe escapes and ends up at a shelter for troubled youth. Dr. Maggie Burroughs is overseeing his case and in attempts to cure his amnesia wants to take him back to the town where he barely got away with his life. Meanwhile three other teens from the shelter escape only to end up in Springfield where they meet up with Dr. Burroughs and John Doe. The child absent town has left adults wandering, looking for meaning, leaving John Doe and Maggie free to uncover the identity of the former and find out who this mysterious Freddy Krueger is. The point of this film is to tie up lose ends, satisfy demanding fans, and make a profit off the now iconic Freddy.

In the documentary they mentioned that because this was the last one they just went ahead and self destructed, and that's a fair summary of the film. The back story of Freddy's child came out of nowhere, like literally nowhere. Not that it's impossible for a child killer to have a child but in context to Freddy's reasoning for existence it makes little sense as to why he loved his daughter but was more intent on killing the Elm Street teens than finding her, especially since she's thirty years old. The film tries far too hard to be comedic, having Roseanne Bar and Tom Arnold in it for cameos. The one liners...I'm sorry but just because you throw 'bitch' at the end of every small phrase (i.e. Kung Fu, bitch), does not make it funny. "Welcome to Prime Time, Bitch" was a classic line from the third film and they've managed to abuse its power in every film since. The deaths in this one are like the others they relate to the individual victim but are not scary, the only one I found upsetting was the kid with the hearing aid. The ending is pretty dismal, the 3D add on not really bringing too much to the series. 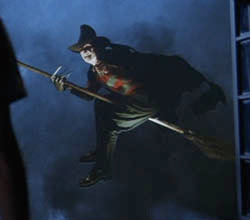 Lisa Zane plays the doctor and daughter to Freddy, she was alright having the adult role in the film so her acting shines above the teens. Breckin Mayer is in the film, he's a known face but not a household name (he was an 90's teen actor who never got that big). Robert England flows with the Freddy change, he's not formidable but he's as gleeful and witty as ever. I was excited to see Alice Cooper as Freddy's step-father but it was a brief 10 seconds and I noticed that they also managed to rip off Stephen King's The Shinning by using the phrase "Take Your Medicine", while crushing my dreams. There's more plot in this one than the previous film, which was completely absent of one. Despite that though the film was a lot worse than warranted, especially since Rachel Talalay was the director. She started out as the Assistant Production Manager on the first film and worked her way up to director. She has a fairly lengthy list of films to her directorial career but this is her first film so its really not bad. In all honesty the biggest fault in the film is the writing, it's too silly to be commended as a horror script, it's clearly a comedy. However, unlike nightmare five Rachel went in with intent to be ridiculous, so it's not quite the same fault as in the fifth when it falls on its face.

I'd like to point out that the tagline inaccurately presaged the film, on both accounts. This is not the last nor is it the best. Freddy's makeup has been loosing its quality for a few films now, looking less like a burn victim and more like a makeup school's first prosthetic project. I'm not sure what else to say other than that it seems like little effort was put into this, almost like The Blair Witch Project the publicity was more interesting than the film (Freddy had a funeral). This was the only film out of the franchise that I wanted to turn off. It's not like it was horrendously bad, of course not. Despite an excess of one liners, bad acting, and a ridiculous plot this is not the worst film I've seen, far from actually. My verdict is that if your not out to watch all the nightmare films than this one is an easy miss.
Posted by Bleeding Dead at 6:46 PM
Email ThisBlogThis!Share to TwitterShare to FacebookShare to Pinterest
Labels: Cult Horror, First Time Director, Franchises, Freddy Krueger, Horror Icons, Never Sleep Again, Robert England, Slasher Film