I started a new job today (that I already dislike) and also had to go to my second job so the review is not...in pristine condition. See I just used the word pristine. Anyways I apologize ahead of time for the deficient writing and pallid word use but I also figure that since it's Freddy Vs Jason there's no real need for a professional tone, to mimic the nature of the film of course.

Four years of peace have reigned on Elm Street after Freddy's daughter killed him for good. But Freddy's not ready to sleep just yet and begins to haunt the nightmares of Jason Voorhees, a serial killer who resides at Camp Crystal Lake, killing horny adolescent camp counselors, no less. Freddy convinces Jason to travel to Elm Street and murder the teens there to awaken the fear of Freddy, resurrecting him officially. But Jason starts to get knife happy early on in the film, switching the battle from horror-movie-rule-breaking-teenagers, to a fight between the two notorious slashers. There's this commercial where a dad is sticking his son's feet in plaster and the mom walks in and asks what they're doing. He says that they're making socks that fit to their feet because no other socks will. The mom replies simply "That's really stupid." That's how I feel about Freddy Vs Jason, but in a good way.

I'm potentially going to abuse the word 'camp' in this review as it sums up the majority of the film, also because this is part of the Never Sleep Again reviews I'm going to address mostly Freddy's side of the film, as I don't know too much about Jason and can't speak for his series as a whole. It's rather amusing that out of all eight films the most recent one is the campiest of them all. Ronny Yu as a director is always intriguing but as he mentions he intends not to take the horror too seriously, which could translate in to absolute lack of sobriety, as this film reeks of drunken fun. Freddy Vs Jason is so fatuous that it reserves rights with The Evil Dead and Dead Alive horror archive (alright, maybe not THAT funny). In laughter and in gore; excessively bloody, especially in the end, the final scene between our two slashers is drenched in it. A lot of it is hidden in the dark lighting of the film (presuming to get away with an R rating) which tones the violence down some. There's a fresh variety in the kills as Jason takes his machete to them at different angles, and Freddy uses his claws on the few victims he's allotted. 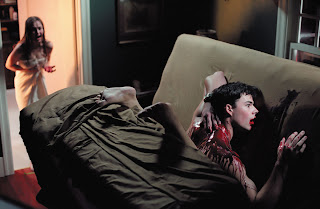 The acting is so bad its campy bad and Brendan Fletcher isn't helping. But as the ostentatious use of blood it's fitting for the film and the overall lack of purpose. All the teens are not good and play it way over the top, the only one I'd account for because she had a good performance or at the least tried to make it more was Katherine Isabelle. Freddy as a character is a bit lost in the script, they did away with most of his clever one-liners and he's not as prominent as the side story of Lori and Will (gag), but Robert England plays him as smoothly as ever, no bumps or scratches from age or shift in intent (this film isn't as imaginative as the previous Elm Street films). The writers don't take away from Freddy, however, by throwing him straight into a slasher film, in all respects, but they continue to add a cunning nature to him, especially when him and Jason are fighting and he continuously finds objects to impale Jason with. 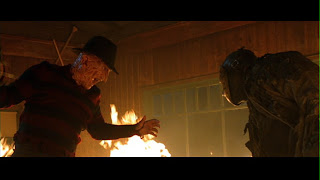 Freddy Vs Jason delivers what the subtext of its title promises, two slashers in an epic battle, with a dozen or so teenagers getting slashed along the way. Freddy's makeup is as it was in the 80's but done on a more professional budget, but there's still that pizza face prosthetic under the gleams of lighting. The film is partially consistent with the Elm Street stories but has to sacrifice its style some to let the Friday the 13th tone through. The film is not an adept horror film, don't take it as one.
Posted by Bleeding Dead at 5:45 PM
Email ThisBlogThis!Share to TwitterShare to FacebookShare to Pinterest
Labels: Bloody, Cult Horror, Franchises, Freddy Krueger, Horror Icons, Never Sleep Again, Robert England, Slasher Film