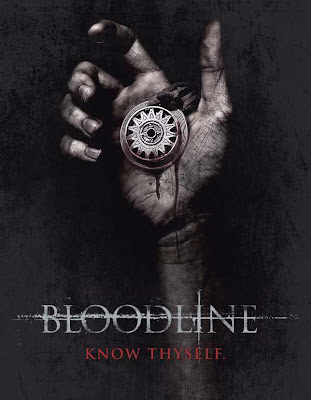 Los Angeles- Osiris Entertainment Film Distribution collaborates with Regal Cinemas to release the company’s first theatrical film, Bloodline. The fantasy thriller is slated to premiere late September in markets such as Los Angeles, CA and Sacramento, CA.
Produced by and starring Sacramento-native and award winning director, Matt Thompson, Bloodline is the first theatrical release for Osiris Entertainment. Thompson is originally from Roseville, CA and has directed the award winning film, Listen to Your Heart (2010), starring Cybill Shepherd. The young producer and his talents hit his hometown again, as his Bloodline will feature in five Regal Cinemas throughout the Sacramento region late September 2013.
Shot and filmed in the Eldorado National Forest of Sacramento, Bloodline uncovers the eerie past and life of Brett Ethos (Matt Thompson). A young seminary student inching toward a priestly life, Brett falls away from the church as his curiosities entice him to divulge into worldly pleasures ultimately leading to the relentless realities of his identity. Tempted to unmask the hidden mirrors of his past, fear consumes him at the site of the haunting reflections, as self-discovery becomes the most terrifying journey of all. Truth is discovered, blood is tainted, and darkness pollutes their fate, Brett puts his own life and the lives around him in an immense danger as he is torn between his faith and his curse.
“We are excited to work with a young and successful director such as Matt,” says Osiris Entertainment CEO, Evan Crooke. “As a filmmaker myself, I recognize his talent and ambition towards a genuinely shared passion, which is displayed through his work especially Bloodline.”
Bloodline also stars Kimberly Alexander (NCIS), Grainger Hines (Lincoln), Jesse Kristofferson (Melrose Place), Gina Comparetto (How I Met Your Mother), and Christopher Frontiero (Parks and Recreation). Interviews are available upon request.
About Osiris Entertainment:

Based in Chatsworth, California, Osiris Entertainment is a film distribution company with the broad arena of talent, knowledge, and skill requirements necessary to succeed throughout the international and national scopes of the film industry. Created by a notable filmmaker, Evan Crooke, Osiris Entertainment serves with a mission to efficiently and simultaneously satisfy the business and creative needs toward the success of each film.  Osiris Entertainment provides the various platforms of distribution with quality films ranging from the different genres of entertainment reaching the international and national markets. Osiris Entertainment has a large catalog of films and distributes to an array of the top global broadcasters such as, NBC Universal, Netflix, RedBox, Starz, A&E Networks, Dish Network, Amazon, Ingram Entertainment, Warner, AT&T, Rogers, Verizon and Showtime along with partnering with prominent retailers such as Wal-Mart Osiris Entertainment continues to expand as it partners with major cinemas for theatrical releases such as AMC and Arclight Cinemas. Films distributed by Osiris include, The Briefcase (Kip Pardue, Vincent Malone), The Kill Hole (Chadwick Boseman, Billy Zane), Clear Lake, WI (Michael Madsen), Raspberry Magic (Bella Thorne) and award-winning releases such as Listen to Your Heart (Cybill Shepherd), All God’s Creatures, Surviving Hitler: A Love Story, and Pretty Ugly People (Melissa McCarthy, Missy Pile), The Year Dolly Parton Was My Mom and Father vs. Son.

Posted by Bleeding Dead at 8:03 AM
Email ThisBlogThis!Share to TwitterShare to FacebookShare to Pinterest
Labels: Press Release