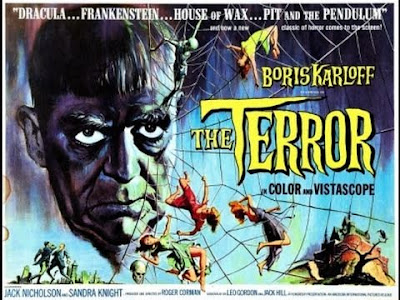 "Karlof is effortless as Baron Von Leppe, although playing the enigmatic, strange man who keeps to himself in a lush Gothic castle is likely the equivalent to slipping on a tailor made glove for the actor. Not necessarily one of his late roles but no doubt towards the last years of his life he still manages to bring trepidation to the screen. This is an early Jack Nicholson film, where most of his effort is simply just showing up to work everyday. His acting is a putative choice of boredom or maybe just disregard for the entire project, but is also backed by a character and script that is neither lucrative or developed. The film's sets are leftovers from the much more successful The Raven, but are still useful in creating a dark, somewhat Gothic tone"

I haven't posted a Retro Review in two months so it was overdue. Unfortunately I wish it was with a more charismatic review for a film that was more of a film and less of filming Jack Nicholson pretending to be a soldier. If that makes any sense. The summary for the review is awful but in my defense there wasn't much to work with. Please read, comment, or ignore if you choose, whichever it is though you may read the rest here.

Also my The Purge Contest - Raise Your Hand for a Creepy Mask, is still going and you have until this Sunday to enter. So far there has only been one entry so you have fairly good chances of winning.
Posted by Bleeding Dead at 1:05 PM
Email ThisBlogThis!Share to TwitterShare to FacebookShare to Pinterest
Labels: Roger Corman, TDHorror Retro Review