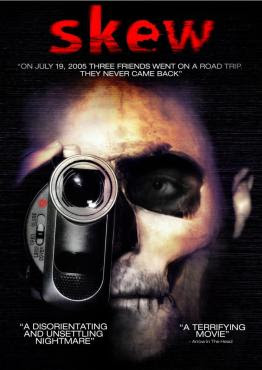 Holy S*%T!  It’s a DOUBLE dose of horror in one press release!

The psychological horror feature SKEW has been described as “Truly unnerving” (Rogue Cinema), “A terrifying movie” (Arrow In The Head) and “Paranormal Activity on steroids” (Australia’s A Night of Horror International Film Festival).

SKEW follows three close friends who head out on an eagerly anticipated road trip with video camera in hand to record their journey.  What starts out as a carefree adventure slowly becomes a descent into the ominous as unexplained events threaten to disrupt the balance between them.  One by one they must struggle with personal demons and paranoia as friendships are tested and gruesome realities are revealed…and recorded.

Before such box office hits as Paranormal Activity (2007), Cloverfield (2008), and Quarantine (2008), writer/director Sevé Schelenz brought SKEW, his first feature film, to camera in 2005.  Within the same vein as The Blair Witch Project, Schelenz creates a first-person account in psychological horror that will keep audiences on edge until its revealing conclusion.

For more info on SKEW contact Sevé Schelenz at sleepapneaprods@hotmail.com.

Note from Editor: My review of Skew may be read here, if interested. There will also be more exciting news from Sleep Apnea Production coming soon.
Posted by Bleeding Dead at 9:44 AM
Email ThisBlogThis!Share to TwitterShare to FacebookShare to Pinterest
Labels: Found Footage, Press Release