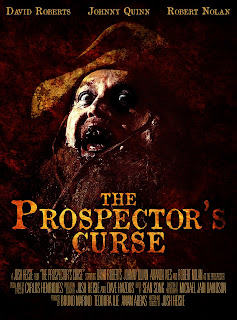 When a dim-witted local and a money hungry salesman come across a dying prospector in the woods, his last wish is for a proper Christian burial. Despite the local's intention the salesman convinces him to leave the dead man in the woods and pursue his land for gold, causing a hellacious hillbilly revenge. The Prospectors Curse is the hillbilly sanction of hell where humor, horror, and the goldrush are the layers of the inferno. Josh Heisie's film has an easy flow with a natural amusement, not contrived as is often the freight with horror comedies. The production is sound with noteworthy mention to the makeup, The Prospector was both dire and delightful which tied the horror into the plot. The classic revenge of the ghost is compassed with an almost zombie like approach, as he looks more to the undead than as a spirit.

Dave Roberts and Johnny Quinn fit to their caricatures well and don't overplay the exaggeration. Robert Nolan plays The Prospector with a menacing glee, the character actor is again great in his small part and on his way to becoming the next Brad Dourif of the horror genre. Michael Jari Davidson is a talented DP, having done previous work on another film I enjoyed, Familiar, and continues the same dark but slick style in this. The Prospector's Curse is actually the first film in an anthology of films that take focus to different era's of B-horror. For a sub-genre that I'm familiar with only in part, I really quite liked Heisie's sophomore film, leaving me excited for the next installments that are genres I comfortably know. If you get a chance to see The Prospector's Curse don't hesitate as it's a fun fifteen minute watch for any horror fan.

The trailer may be seen below. You can watch for updates on the film's facebook page or at its website.

Posted by Bleeding Dead at 11:42 AM
Email ThisBlogThis!Share to TwitterShare to FacebookShare to Pinterest
Labels: Horror Comedy, Horror Shorts