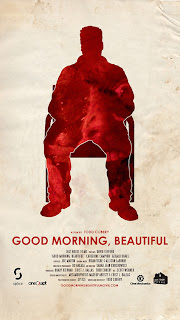 After the death of his baby daughter Dave becomes numb with the inimitable tragedy. His wife, just as broken, is distant and all Dave sees is ugliness. As Dave is getting perspective into the truth of the world the silhouette of reality falters and chaos awakens. Good Morning, Beautiful runs at twenty minute length and if a full feature it'd remind me of Let the Right One In (I'm sure this comparison is becoming tiresome) in that it takes the pace slowly and doesn't force feed you the horror, so to speak. Not exactly surrealistic in plot but more of a brutal metaphor in that monsters and obscene violent acts openly occur in broad daylight as Dave goes about common activities. Though Dave is seeing monsters the real fear is in the world he's living in where babies die, people get shot, and there is no sense of control any more.

David Tufford seamlessly handles the blurred reality of David, not missing a step from the depressed man to the feared individual he becomes. Todd Cobery script is developed in a further sense; it addresses the less attractive side of the world while presenting us with the horror. As well as adding moments of levity to lighten from the more macabre subjects as infant death and child murder. Cobery's direction also shows that of experience, his direction of Dave waiting in the doctor's office is great taking focus to the child's toy in the back to reflect the horrible wait and just the general inpatients to being there. I also loved the opening with the fast play around Dave as he lifelessly sits still in his chair hearing the news about his daughter. Bo Hakala's work as DP is nice, the lighting and angels being on key with Cobery's direction. Good Morning, Beautiful was my favorite short film at the Mile High Horror Film Festival. It's another that managed to speak more of society than most films as it takes focus to the general ugly on the world, even if it doesn't give us a solution to stop it.