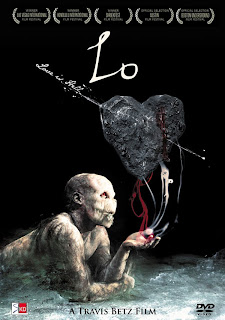 Lo is a fairly humorous fairly enjoyable love story, with demons. Justin just lost his girlfriend, April, to a terrible accident, getting taken to hell by a demon that is, but as to demonstrate the limits of his love he summons Lo, a crippled smart mouth demon whose job it is to help Justin out. But as Justin spends more time in the close silhouette of hell he'll find out a few things out about April that'll tempt him to question his decision.

I'm not altogether sure how to start this, Lo is one of those films where it's hard to gather your thoughts. I presume I shall start with how I viewed the film. To say the least I liked it. It's not really an eventful movie, the entirety of the plot being based off conversations Justin has with the demons and flashbacks of him and April's love. There is one action scene but it's kind of corny, in fact there was an excessive amount of parts that are corny, but I'd argue that they were intended for comical effect. The film isn't all that much horror either, though the demon's look great and can be effectively scary if desired, its just that there's nothing all too horrifying about it. Also to note, it happens to be 1/16 musical, so if you keeping count we have a horror romantic musical comedy going on here, all tied into one small low budget film. But that's part of the charm of Lo.

Ward Roberts as Justin comes off a bit over the top in some comedic scenes but the final romantic moment, perhaps the only one in the film truth be told, is pulled off well between him and his opposite Sarah Lassez. And Jeremiah Birkett as the smart mouthed title character is adroit in his role. As other viewers have mentioned the film looks like a play, with an empty stage like effect. All you ever see is Justin, Lo, and the very stage-esq flashback scenes. Actually I can easily see this being a play and it may be more adequate as that, than as a film. 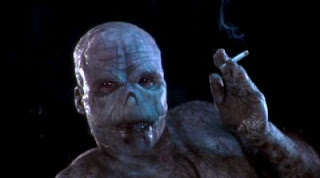 Like I said I enjoyed Lo, it's a droll little film that manages to hold your interest. Its clearly not for everyone, as its misconception of being a horror film will probably anger some, leaving it little chance to let it come into its own. I'd say watch the trailer, read a few more reviews, and decide for yourself whether or not to watch it.
Posted by Bleeding Dead at 3:28 PM
Email ThisBlogThis!Share to TwitterShare to FacebookShare to Pinterest
Labels: Black Comedy