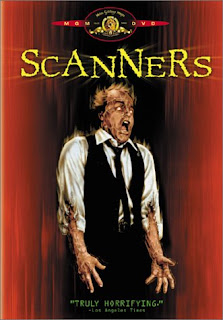 If I write, David Cronenberg, what film comes to mind? The Fly? Videodrome? Eastern Promises? Which ever of his films is your initial fix on his stuff you can't go in your Cronenberg viewing experiences without ever seeing Scanners.


Scanners is a Sci-fi/Psychological Thriller about two groups of psychics going head to head, literally. The main character is Cameron Vale, a new found scanner hired by Dr. Ruth to infiltrate an underground scanners operation run by Darryl Revok. What exactly is a scanner? It's an individual who has a mix of mind powers such as telekinesis, telepathy, and on occasion pyrokinesis.
The plot build up is a bit odd and there's obvious holes but the two bigger reveals at the end are cool (truthfully though you can see one coming). I really liked how the scanners gene was explained, that brought the movie to another level. If the movie had more of a development as far as plot goes it may have been a lot better than it was. But then again it wouldn't really be a Cronenberg film without his B-style film making. 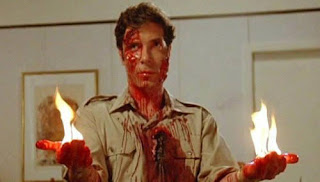 This movie contains a rumor that it's about head's exploding, that's sadly not the case. There is one head explosion that is amazing in it's own right, but it's honestly the only one. The typical style of gore is here for Cronenberg, and despite how it can at times look fake I love watching it. The best scene though is at the end where like I said the 'good' scanner and the 'bad' scanner go at it with their scanning powers. The effects used with the viens are really great to watch. 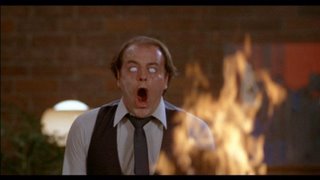 Acting wise Michael Ironside was great as Darryl and Jennifer O'Neill wasn't bad as Kim. It's Stephen Lack as Cameron that about destroys the thing. He's stiff and reads all his lines, I'm not exaggerating, ALL his lines in monotone. At first it's a simple annoyance but as the movie precedes it becomes a distraction.
Scanners isn't the best movie ever made, nor is it the best Cronenberg film ever. But I'd say it's not a complete waste of two hours.
Posted by Bleeding Dead at 5:57 PM
Email ThisBlogThis!Share to TwitterShare to FacebookShare to Pinterest
Labels: B-movie, Bloody, Cult Horror, Psychological Thriller