I've written three reviews and...still no followers. That's okay I didn't expect it to happen so soon, if at all. But since I'm basically talking to myself at this point and I'm a little slow at the review writing (Catfish is in progress as well as Scanners) and since Mondays are just awful and October is my favorite month (massive horror movie watching) I've decided to do something a little special. Top five lists! Yeah, not all that exciting. In fact I hate top insert number lists because the author and I are in difference of opinion. Either way here's the first.

There's a lot of creatures out there, aliens, vampires, werewolves, etc. but my personal favorites have always been zombies. Something about the disease infested versions of ourself has always held a higher appeal than any other monster. I don't know if it's the most likely of opponents to happen (2012 zombie apocalypse!), or if it's that zombies possess our inner most fear of infection, I'm not really sure why I love them but I digress, Top Five Favorite Zombie Movies of All Time (or so far):

George A Romeo's low budget classic has the rights to two important cinematic firsts. The first zombie film (if you dis include the earlier version of the term, which relates to the voodoo technique) and the first African American hero/lead in a horror movie. Despite it's age the black and white film still presents a prodigious amount of scares with a fair amount of blood. The zombies are in their original state, mindless beings who randomly hunt to feed their lust for flesh. And Karen Cooper eating her father sets the essential question in all zombie films, wanting to survive vs killing the ones you care about.

Zombieland is just...funny. I'm not sure how else to describe it. It's an hour and a half of watching four different individuals kill zombies in creative, yet bloody, ways. Pair it with a gifted actor like Woody Harrelson and you've got a ridiculously funny movie dedicated solely to the art of zombie bashing. 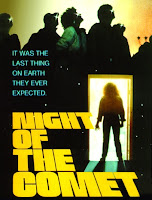 Part satire, part cult horror Night of the Comet is a enjoyable zombie movie where you can laugh at the cliches but still care enough about what happens to the characters. There's flaws in Hector, Reggie, and Samantha but it doesn't weigh the movies prominent goal of parodying disaster movies. It's really got everything; the smart older sister whose just naturally skilled at kicking ass, the dumb younger (and cheerleading) sister, the not so cute but charming male hero, 80's movie shopping montage, action, satire, and of course zombies.

I may be shunned for this but... yes I love Peter Jackson's Dead Alive more than I do Sam Rami's Evil Dead. Don't shoot me! While I think Evil Dead is hilarious in it's own right I feel that Jackson's film applies more to my humor. The darker or less obvious humor such as a mama's boy going so far as to keeping his zombified mother locked in his basement because he can't part with her is what makes it such a win for me. But the absurdity (Zombies having rough table sex, Lionel making his way through a zombie crowd with a lawn mower) is also a helpful attribute. And this is the most blood I've ever seen in a film, which just makes it awesome.

Dead Alive comes second because while it's the best zombie movie resulting from the genre (IMO) 28 Days Later does a lot more than the genre expects. It has the humor, the survival outline, and the (fast) zombies but it's really about human nature. It's unique of the director and the writer to try to do a human study film within a horror movie, which once accomplished seems like an obvious pairing. They explore into our species animal like nature through the disease and through desperation of those not infected. It moved the genre from cheap scares with slow brain suckling zombies (don't get me wrong I still love those too) into a grisly and uncommonly deep insight.

For those who are reading post your own list, I'm curious.
Posted by Bleeding Dead at 10:47 PM
Email ThisBlogThis!Share to TwitterShare to FacebookShare to Pinterest
Labels: Top Five Lists, Zombies

We have the same taste I'm starting to think... 28 Days Later even though I still debate that it's an Anti-Zombie film is still my fave Zombie like film of all time. Danny Boyle nailed it. Nothing like seeing one of the busiest cities in the world completely desolate. Great List!

Thanks, I'm starting to think so too, every review I read of yours I share similar thoughts.