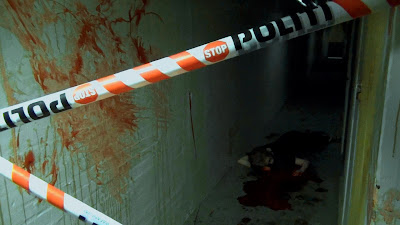 The good old classic quote "There's something rotten in the state of Denmark" rings true these days, although it is probably not quite in the way it was meant when written by William Shakespeare in "Hamlet"!

In directors Martin Sonntag and Bastian Brinch Pedersen's near-doomsday prediction "Escaping the Dead", Copenhagen reeks of rotten flesh after having come under attack of the living dead and the last remaining survivors fight for their lives.


The film stars Bastian Brinch Pedersen (who is also the co-director and producer of the film) as David, Rama Øzel as Ahmir, along with Daniel Hutera, Ali Öezkan, Iben Ma Bønnelycke, Nicolai Huan Nguyen, Camilla Ludvigsen and Kim Sønderholm ("Blood Fare", "The Winedancers", "Sinister Visions") playing Lars - a policeman that David comes across during his run out of the city.


Director Martin Sonntag about the film:

"The film is inspired by a series of articles about the deathdrug "Krokodil" that was published about the same period of time when Ronald Poppo had his face eaten by a naked man hooked on bath-salts in Miami. We saw it as the perfect zombie plot: a death-drug that turns people into zombies.

The film has its starting point in a typical day for the lead character, David. David is the local marijuana pusher, but he is the kind of dealer that smokes more than he sells. In the meantime the country has been hit by a new death-drug and when David and his partner in crime Ahmir is offered some exceptionally cheap cocaine they see it as an opportunity to earn big money at the big techno concert the following Friday, but the cocaine turns out to have a terrible side effect that creates a giant zombie outbreak that spreads across the entire Copenhagen. In the film we follow David and his bloody fight out of the city."
Posted by Bleeding Dead at 7:45 AM
Email ThisBlogThis!Share to TwitterShare to FacebookShare to Pinterest
Labels: Press Release