This was suppose to be posted on Saturday to make the two post deadline for the month of September but complications, as in a slow computer, prevented it from happening. I figured what the hell though I never make the two month post limit anyways and this way it's more likely to happen for October because it's only the second. 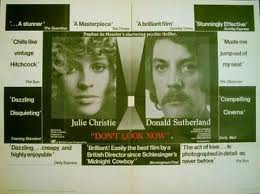 "Viewers be warned DON'T LOOK NOW is a taunting thriller that takes you through a cautious two hour pace before delivering its only true shock and scare moment. It's a character heavy film in that not much occurs but the depth and understanding to Laura and John's loss. Essentially that is all the film is really about, a mourning couple who becomes lightly touched by the supernatural at the effect of their daughter's death. It's definitely a film study where there's an array of themes and motifs, almost as much as novel, where there's less of action and more of reaction"

You may read the rest here. I don't have much as far as updates since I posted a huge update post last Friday. Nothing has changed since, except I believe I finally came up with a good idea for the Bad Dollar contest. As of right now though I don't have any reviews planned for this blog, but I am (hopefully) going to the Mile High Horror Film Festival Saturday and I'm seeing two films as well as a lot of short films so I'm sure somewhere in there I'll find something to write about. Again I'll try to be as present on this blog as possible. Thanks for all your support. And please read and comment on the Retro Review.
Posted by Bleeding Dead at 6:10 PM
Email ThisBlogThis!Share to TwitterShare to FacebookShare to Pinterest
Labels: british, Psychological Thriller, TDHorror Retro Review