February is an odd month; it doesn't follow the basic calender system, it gets an extra day every four years; a groundhog has his day; it celebrates African Americans, women, and throws in the most pointless holiday of the year, Valentines Day. BLEH. Not that all these things are bad by any means, it's simply that they have nothing in common but the month of February. It is Women in Horror Month however, in relevance to this blog. Few people are still uncertain of my gender but I am a woman, who loves horror so it all works out.

I'm not really sure what to do for Women in Horror month, I do know I'll be posting randomly throughout the month, on Follow Friday no less, but in specific I cannot say. Regardless thereof I thought I'd address a few not forgotten Scream Queens on my top five list last October. It's not so much as I didn't consider them Scream Queens it's just that they slipped my mind. 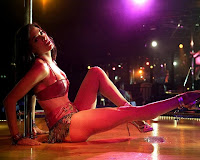 I'm a tad bit disappointed in myself for missing Rose McGowan on my Honorable mentions list. I love Scream and Planet Terror and as to how I managed to forget Robert Rodriguez's zombie film staring a one-legged-gun Rose McGowan is quite disturbing and disappointing. Regardless how can you not love her? She's beautiful, funny, and she plays the throwaway friend and the final girl, rare for most Scream Queens as they are usually typecast as either or. McGowan also has a long running stance on the TV show Charmed, which really isn't quite horror but like Ghost Whisper it has its moments. I'm not entirely familiar with Ingrid Pitt, besides knowing that she played in the Carmilla adaption The Vampire Lovers and segarded a legacy as a Gothic horror icon as seductive vampire Marcilla and as Countess Dracula. Hammer Horror actress Pitt survived the Holocaust in a Nazi concentration camp to go on to become one of the most gorgeous and voluptuous horror actresses of all time. Ashely Greene has nothing on her.

I'll admit back in October I was ignorant to Barbara Steele as a Scream Queen, having not seen Black Sunday until as of recently. But it's easy to say those wide eyes of hers have locked me into addiction as I'm not now seeking out her films, especially those with collaboration from Bava. Steele is stunning and admirably a great actress, playing the innocence and the evil so well. Captivating beauty she's the Italian Horror Scream Queen.

Honorable Mentions: I feel that Daria Nicolodi is also unregarded as a Scream Queen. Maybe not the final girl so much but in recognition shes in a good portion of Argento films including, Opera, Phenomena, and his essential giallo Deep Red, as well as Bava's Shock. Maybe not a Scream Queen so much as just a honorable woman in horror.
Posted by Bleeding Dead at 7:45 PM
Email ThisBlogThis!Share to TwitterShare to FacebookShare to Pinterest
Labels: Irrelevant, Leading Lady of Horror

I love Barbara Steele. She could do it all. She was just as brilliant in Bava's Black sunday as she was in Fellini's 8 1/2.

8 1/2 is on my list but as far as I've seen your right there really isn't anything she couldn't do. And those eyes...