I've been absent for a week or so, I know. For whatever reason the month of October and the month of December people are in high demand of me. There will be a review tomorrow despite that I missed one last week. Anyways as an update I'm writing for Truly Disturbing now as an official writer, which means that I'll be dedicating my time to two reviews each month for the site. That's not to suggest that it'll take away from this blog, I'll still being doing my one review a week, the Horror Shorts, Irrelevant Post Fridays, and maybe more? 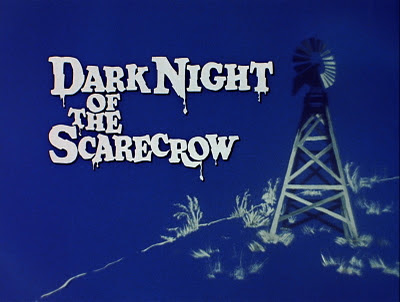 "The film suggests that of two horrors, the mysterious scarecrow apparition that appears before the deaths and that friendly mailman Otis P. Hazelrigg has affection towards young Marylee. The latter is never explored further than a comment made by Ms. Ritter but the suggestion creates a tension whenever Hazelrigg is near Marylee, making you question if he's going to do something in likes to the rumor. The film has a PG level of violence and not for those seeking a hard gore show, the only real bloody death being Bubba's, that was quite cruel in addition to being the most graphic. The idea behind the script is that you’re not sure who is behind the murders. Is it Ms. Ritter? Or young Marylee? Or is it a mysterious spirit that’s to restore balance in the small town?"

And as last time you may read the rest here. You should also comment, while you're there, because it would make me and the TrulyDisturbing owners happy. Also while I'm here I might as well pimp out a few things. First off if you don't read Phill's Film Adventures to start with than you have issues, and second in addition to being an avid movie critique he's a lover of horror and in particular the best of the B's and Cults. In so he's created an entire blog dedicated to just them  http://midnighthorrorsinemashow.blogspot.com/ The first post is of FrankenHooker...it's looking positive for the site. And if you haven't noticed on the side of my page there's a picture with the words Obsess and Consume, click on it dammit. It's by one of my favorite Twitter friends sheoverdosed, it's not just dedicated to horror but to other films, prominently indie which happens to be my second favorite genre. And finally if you haven't watched Microcinema what is WRONG with you?! It's 99 fucking cents, don't get stingy and watch it.

That was an odd assortment of promotional things but they are those I find most pressing, at the moment. I apologize for being rash but considering how good they are and go unnoticed at times is a bit absurd. Either or anticipate an Irrelevant Post Friday next week giving updates on this blog. Also watch out for these TDHorror posts because they are hopefully frequenting my blog about twice a month.
Posted by Bleeding Dead at 9:04 AM
Email ThisBlogThis!Share to TwitterShare to FacebookShare to Pinterest
Labels: TDHorror Retro Review