If you didn't know one of my favorite websites, TrulyDisturbing.com, or TDhorror for short, asked me to write Retro Reviews for them. My first one was of Herschel Gordon Lewis's The Wizard of Gore and can be found here. Thus far I've only done two, hopefully more, but for my second review I reviewed one of my favorite films, Alice, Sweet Alice. Normally I don't like to do such, as I feel analyzing such taints my love of the film, but this film is an exception because I love it despite its odd faults. More giallo inspired horror, with religious overtones, and disturbing flesh colored masks. 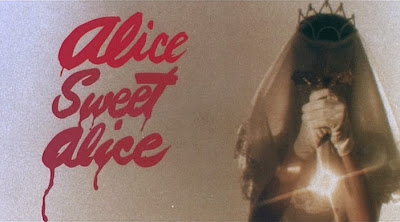 Alice, Sweet Alice (or Communion, or Holy Terror mind you) is about twelve year old Alice Spages who is a little bit off. Often remit by adult's love, who advert more of their focus to her younger sister Karen, Alice has made a hobby of collecting an odd assortment of things, including cockroaches, her sister's favorite items, and creepy flesh colored masks. Karen’s first communion awakens tension between the two sisters and their single mother as  becomes increasingly jealous by the attention given to Karen. Jealously might possibly turn into rage as Karen ends up dead in the church and  is missing from sight during the murder. Everyone begins to suspect and nearly convict  for her sister’s murder and others that show up afterwards, but as nothing ever changes, not even in death, Alice blames Karen for the murders. At a loss what to believe the adults struggle to keep composure in this religious horror novelty.
The 1976 film may have died off entirely had it not been Brooke Shield's debut role which pushed the film into three different releases, under three different titles no less. Thankfully the independent slasher flick did receive more attention than normally allotted to such films as , Sweet Alice is one of my bizarre favorites. The heavily played religious overtones create a tediously weird film about God, family, and murder...


You can read the rest of the review at TDHorror. Along with a lot of other really awesome articles and other guest contributions. Specifically an article by ahlephia on horror legend Robert England (yes I got overtly excited when I saw it). http://www.trulydisturbing.com/
Posted by Bleeding Dead at 1:00 PM
Email ThisBlogThis!Share to TwitterShare to FacebookShare to Pinterest
Labels: TDHorror Retro Review