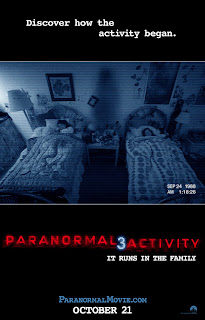 Dennis has recently married Julie and is now step dad to her two girls Katie and Kristi. He's a struggling videographer, a business which he runs out of his home giving him access to a lot of video equipment. While filming arguably the most dull sex tape ever between him and Julie an earthquake happens on film. But the natural disaster pales next to what Dennis sees after the quake has stopped, a spirit standing in their room. Immediately he wants to pursue this further and sets up cameras around the house to see if he can find anything else quite like it. It doesn't take the spirit long, or rather Toby, to make another appearance on tape as he's not shy. But as the haunting becomes more evident Dennis is discovering that this isn't harmless as Toby has a plan for his family, particularly the youngest Kristi.

I enjoyed both one and two in the franchise, finding them properly paced and effectively jumpy but as a whole I'm not necessarily a fan. That's not to say I don't like them, because I do, its just I appreciate them more for their technical plots and story buildup rather than have an actual love for the series. Where the first two relied on the subtly paced and what you don't see, the third takes the opposite approach and bares all. In the end it works rather well, this is by far the most terrifying of the series and I was in constant dread knowing that every time they were on camera something was going to happen, you just didn't know what. Which is a brilliance behind the writing, you've come to expect a certain set of rules to the ghost that's been stalking this family but they essentially throw away all previous behavior and throw you off with new bits of horror. Paranormal Activity 3 made more ploys towards the typical haunted house film (I saw that babysitter peak her head around the corner), where the ghost became physically violent and manifested itself in front of us for scares. The last fifteen minutes not only change how you see the spirit but how you see the series as a whole, it will literally alter your viewing experience. I immediately wanted to go back and watch the previous two films. 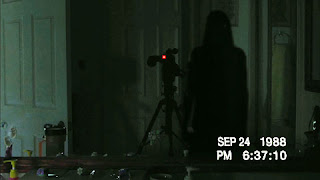 Dennis the likable hippie bum of a step dad is essential in pissing this ghost off with his camera taunting. Am I the only one who noticed Katie basically grew up and started dating her step dad? The parallels between Micah and Dennis are endless down to camera obsession and not having any clear manifestation of a job. While cute, younger Katie and Kristie are not young prodigy actors I hate to say. But I don't necessarily expect much from such so I won't pry further. Lauren Bittner and Christopher Nicholas Smith are fine as the parents, they seem convincing as a couple and that's all that really is needed. In this film the focus is less on the family's emotional struggle and more about the spirit and setting up what's to happen. Therefore acting is incidental and things such as camera placing are more prominent. In addition to two bedroom cams directors and DP set up a living room camera with its base on a fan to give a wide scope moving effect around the room. A very adept approach in creating a new way to scare the audience, as we see what the characters in the kitchen don't.

The film fells less realistic, as did the second, than the first despite having Henry Joost and Ariel Schulman (directors of the documentary Catfish) there to give it that more realistic approach. Though it had its slow moments the first film's realism was based off the sense that everything was on camera, even the pointless stuff. The third is not so much; everything that is on camera is relevant to the plot and set up so it comes off more as a film than that cleaver found footage effect. As of last time the trailer is deceptive, I don't believe that one clip in that trailer makes it to the actual cut of the film. A lot of reviews are claiming this as the best film in the series, I'm less kind. I'll admit while it's the most dire of the series (I jumped...a lot) I'm still accrediting the first film for being the best. Simply because I prefer the what we don't see to what we do. Still that's not to prevent you from seeing the third installment, without a doubt it'll be the scariest experience you've had in theaters for a while.
Posted by Bleeding Dead at 8:15 PM
Email ThisBlogThis!Share to TwitterShare to FacebookShare to Pinterest
Labels: Found Footage, Franchises, Ghosts, Haunted House, Satanic, Supernatural

Thanks, Bleeding Dead, I wasn't certain if I wanted to see this movie or not, but from your description it sounds like it would be an appropriate flick for a Halloween scare. Good to know how it compares to the first two movies.

Seeing a horror movie franchise is a lot like ordering fast food. I'm not expecting fancy fare, I just want to make sure, before I go, that I'm not being shorted an order of fries.

That essentially the perfect analogy for such. Franchises are dangerous areas, they aren't for the casual viewers.

The good thing about this particular franchise though is so far they haven't had a awful film yet, so hoping they keep up with that and stay steady...