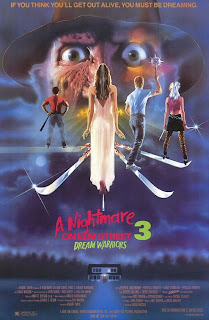 Before the Never Sleep Again mission the third film in the series, and coined as the fan favorite, is one I've previously seen before and as I recall, I very much enjoyed it. A Nightmare on Elm Street Part 3 is set in a hospital for anxious teenagers, who unknowingly have something in common, they are the last of the Elm Street kids. The main character is Kristen, a newly admitted patient to the facility, her arrival brings on Freddy's killing spree within the ward and soon following her is an expert in the field, Nancy. Nancy, now a psychologist, struggles to help the teens while still remaining logical to her peers. But soon Nancy and Kristen learn that the days of helpless dreaming are over, as they are introduced to the dream powers they each posses inside of them.

Re-watching this I did have a mutual experience as of last time, I really liked the film for bring back Nancy, setting up the series's reputation of creativity, and giving Freddy witty dialog. The deaths in this one are really unique and amp the dream concept up in that they tend to the characters personally. My favorite was the marionette, it looked painful and puppet Freddy was adorable yet creepy. And of course I must mention the notorious TV death with spawned the pop icon Freddy, with his line; "Welcome to prime time, bitch". This also, in my opinion, has the best lines and the worst lines. The best going to Freddy and the worst to Taryan for "In my dreams I'm beautiful *cue swtichblades* and bad". And of course others in between. 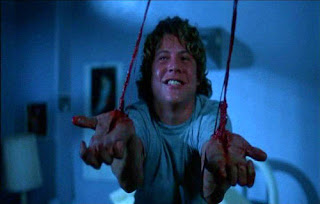 The teens are all likable and were convincing as friends. This is Patricia Arquette's first film and she's actually good in it. John Saxon comes back for a brief cameo, nuff said. In the first Nightmare film I enjoyed the fiestiness to Nancy's character, this time around Heather Langenkemp plays a much more relaxed Nancy, having settled into being adult, but of course when it comes to Freddy that raw fight she displays in the first film comes out. And....Robert England. The script was written by a collection of writers, the more noted ones being Frank Darabont and Wes Craven, both who I think largely contributed to the success of the film. Not that the other two are bad by any means, it's just to their name they have less horror film credit. Directing wise Chuck Russel has an interesting take on how the dreams appear, unlike that typical misty facade he uses open sets and the synthetic pizza face Freddy look to contrast in lighting and set design. 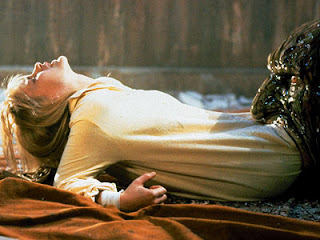 The third film in the Nightmare franchise is not as scary as the first but does a lot better as a sequel than the actually sequel did. The dream gifts bring out an inalienable competency in the films which opt for a more action based dream sequence than the typical running-from-the-boogeyman-slasher-build-up. This one may be the deciding factor in your interest in this franchise, if you like this one you'll probably want to keep watching. If you didn't, however, than I'd stop now because this is the high point in the series. Still if you're going to see any of them, this is the one to view.
Posted by Bleeding Dead at 10:00 PM
Email ThisBlogThis!Share to TwitterShare to FacebookShare to Pinterest
Labels: Cult Horror, Franchises, Freddy Krueger, Horror Icons, Never Sleep Again, Robert England, Slasher Film, Wes Craven